There are immune cells in our bodies that directly destroy infected or cancer cells – they are called natural killer cells. Recently, a POSTECH research team has developed an integrative cancer therapy using adoptive natural killer cell therapy and chemotherapy.

A research team led by Professor Won Jong Kim of POSTECH’s Department of Chemistry developed a treatment for solid cancers using the formation of natural killer-tumor cell immunological synapse through a joint research with GI Cell. The research findings were published as a front cover for the latest online edition of Advanced Materials, a leading academic journal in the field of material science.

To date, three methods including surgery, radiation therapy, and chemotherapy are implemented to treat cancer. While surgery and radiation therapy are helpful in reducing the size of tumors in treating solid cancer, there is a high risk of recurrence due to residual or metastatic cells. The residual cells and metastatic cells are treated by administering chemotherapy to patients, but their use is limited due to serious side effects in all parts of the body.

However, there is an immune system in the human body that can distinguish cancer cells from normal cells and selectively induce their death, and using this mechanism in anticancer immunotherapy not only has fewer side effects but also a higher survival rate for patients compared to chemotherapy.

In particular, treatments using natural killer cells during chemotherapy have low side effects and are more effective in treating leukemia. However, unlike leukemia cells where individual cells float in blood, in solid cancers, the extracellular layer surrounding the cancer tissues reduces the penetration rate of the natural killer cells, thus lowering their efficacy. Studies are being conducted to overcome this issue. 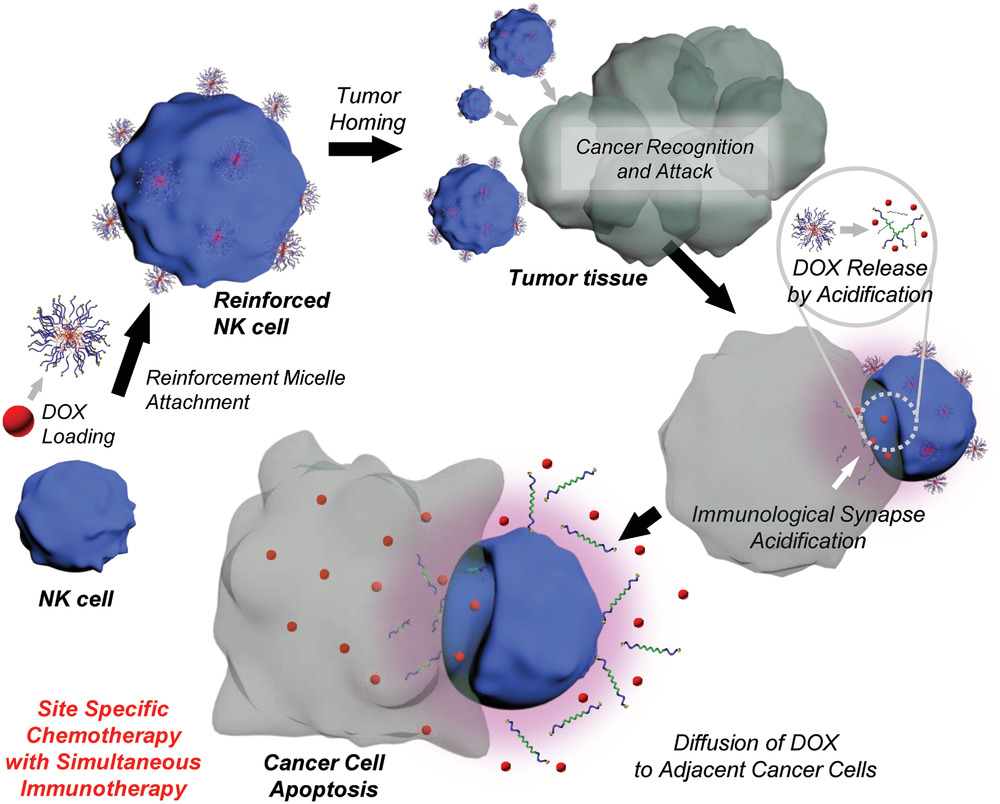 It was also anticipated that cancer drugs could induce the death of cancer cells in the deep parts of the tumor as their size is small enough to penetrate the dense extracellular layer around the tumor tissues. In the treatment of solid cancer, the team fused the adoptive natural killer cell therapy and chemotherapy to overcome the low therapeutic effects and high side effects. They implemented a system that can release anticancer drugs only when natural killer cells recognize the cancer cells and induce their death.

In addition, video footages filmed using a confocal scanning fluorescence microscope confirmed that acidity was reduced in the immunological synapses formed between natural killer and cancer cells and that the ReNK*2 system selectively released anticancer drugs.

It also confirmed that the delivery efficiency to cancer tissues increased significantly when anticancer drugs were delivered using ReNK in animal models with solid cancer.

Professor Won Jong Kim, who led the study as a corresponding author, stated, “This study is significant in that it has developed a strategy to enhance the effectiveness of cell therapy using natural killer cells in treating solid cancers.” He added, “This method can be applied to any cell with a simple process, so we expect to apply it to treatments currently on the market or in clinical trials.”

The research was supported by the Creative Materials Discovery Program, Mid-career Researcher Program, and Bio & Medical Technology Development Program of the National Research Foundation of the Ministry of Science and ICT, and by the industry-academia research project of GI Cell. The patents related to the research were transferred to GI Cell.