Disease Complications Can Be Predicted by Protein Localization (2011.5.26) 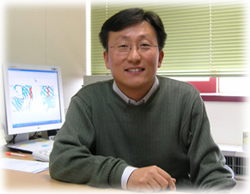 It is not uncommon for diseases such as diabetes, hypertension and cancer to develop complications. Recently, a research team led by Professor Sanguk Kim of Department of Life Science successfully devised a method for predicting disease complications based on comorbid disease pairs by employing a network medicine approach.

According to extant studies, many human diseases that occur in the same patients are connected by shared genes or protein-protein interactions. However, it has been difficult to identify the disease interactions or associated genes for major human diseases such as cancer and diabetes.

For diseases such as diabetes that can cause a number of complications, the conventional method of risk factor analysis has limited applicability, and also its reliability widely varies depending on the doctor or the size of medical institution.

Professor Kim’s research team has developed a network medicine approach to identify the co-occurrence patterns and their complications of the diseases such as diabetes and hypertension. Based on over a million patients’ records, the team has analyzed the interactions between subcellular localization of the disease-associated proteins and disease comorbidity (disease co-occurring patterns).

Such identification is significant because doctors can use the patterns to predict potential comorbid disease pairs likely to appear in their patients. Moreover, with the subcellular localization of the proteins in the analysis, the new method improved the prediction coverage of disease occurrence by more than twice.

Currently, patients of certain diseases prone to complications including diabetics have to be examined for potential disease complications on a regular basis, because there is no reliable prediction method that exists. Several countries are trying to introduce such a system to improve the prognostic health care systems.

“Our team has improved the disease prognosis methods by developing a network medicine approach that takes into account the subcellular localization of disease-associated proteins. I believe the introduction of the network medicine and E-health care system will make it possible to detect disease complications at an earlier stage and minimize their occurrence,” commented Professor Kim on his work.

The research was supported by the Korean Ministry of Science and Education’s World Class University project and POSTECH’s National Core Research Center for Systems Bio- Dynamics.