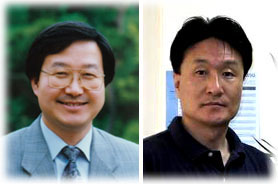 Until now, all nonvolatile memories are fabricated with inorganic materials that are used in complementary metal-oxide semiconductor processes, and are based on charge storage. Their disadvantages of slow programming, limited endurance, and high voltage requirements have prompted the research team into investigation of organic and polymer materials which exhibit easier processability, flexibility, high mechanical strength, and scalability at low cost. However due to high ON/OFF voltages, development of polymer based nonvolatile memory devices have remained work in progress, until now.

“The high ON/OFF switching ratio and stability of these devices, as well as their repeatable writing, reading and erasing capability with low power consumption, opens up a possibility of mass production of high performance digital nonvolatile polymer memory devices with low cost,” Professor Ree said, adding it would revolutionize microelectronics by providing extremely inexpensive, lightweight, and versatile components that can be printed onto plastics, glasses or metal foils.

The research was supported by the Korea Science & Engineering Foundation, Samsung Electronics, and the Korean Ministry of Education.