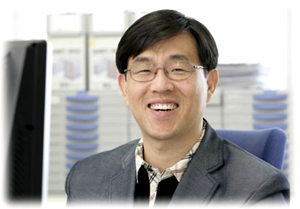 Professor Sangmin Jeon (CE) and Jinmyoung Joo (Post Doc.) have developed the technology that diagnoses cancer by using micro-oscillators made of photo- catalytic silicon and nanoparticle on the inside and magnetic material on the outside.

This technology, published on ACS Nano, attracted academic attention because it could be applied to cancer diagnosis at once as well as early detection, which is crucial in cancer treatment.
When patients suffer from cancer, the concentration of specialized proteins in blood and other body fluids increases. This technology uses the concentration of the proteins to detect corresponding cancer. However, it is difficult to diagnose cancer in early stages because the specialized proteins are only created in a small quantity compared to other proteins in early stages.

To solve this problem, the research team synthesized nanoparticles made of photocatalytic material on the inside and magnetic material on the outside, and then inserted it in the blood vessel. As a result, they succ- eeded in detecting and separating spe-cialized proteins by nanoparticles for- ming magnetic fi- eld. In addition, the research team easily detected infinitesimal proteins through photo reduction using photocatalytic property, greatly reducing the measuring time from about four hours to merely one hour.

Prof. Jeon stated, “This technology is expected to be more effective and eco- nomical than existing measuring techniques because it shortens diagnostic time by measuring infinitesimal proteins related to cancer. It is why this technique receives spotlight from academia.”