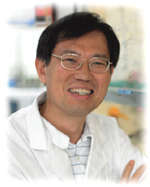 Professor Kimoon Kim and his team revealed that cucurbiturils, small nano-sized molecules, can enable the analysis of many types of cancer and of stem cells in a very simple manner similar to fishing. Named after the plant family ‘Curcurbitaceae’ and shaped like hollow pumpkins, cucurbiturils can hold various ions or molecules like ferrocene inside, and can have ions attached on top and below through host-guest interactions, which means they have great potential for various applications.

The compound was first synthesized in Germany around a century ago and its structure was elucidated in 1981, but not many scholars have been interested in its development. Professor Kim, having conducted research on it for 20 years, says, “They are simple in structure and easy to make, but not many knew that. The world has just started paying attention to this amazing material since my team showed the world how versatile it can be.”

Teamed up with Professor Sung Ho Ryu, Department of Life Science, Don-Wook Lee, a PhD candidate, and the biotech venture firm Novacell Technology, Professor Kim became the first person to succeed in separating the membrane proteins from cells using cucurbiturils and ferrocenes. Cell membrane proteins act as a passageway for cells to recognize its surroundings. As they can help diagnose certain types of diseases and reduce the side-effects of medical treatment, cell membrane proteins are becoming increasingly significant in the field of life science.

For analysis of cell membrane proteins, it is necessary to extract membrane proteins, and the avidin-biotin pair was known to be the key element for the process until now. The avidin-biotin pair is a combination of a protein (avidin) and a vitamin (biotin), and is known to have the strongest bond in nature. However, the pair has two flaws: it easily mixes with protein compounds, and is low in chemical stability. Consequently, accurate results were difficult to obtain.

These results further suggest that cucurbiturils can also be utilized as drug delivery devices that target specific disease cells, such as cancer cells, or as biochips that can detect diseases. Furthermore, they keep any side effects to a minimum. Specialists in the field are expecting this small, chemically and biologically subtle cucurbituril-ferrocene pair will become a powerful tool for the precise imaging therapy of cells and tissues, let alone for basic research in biosciences in the near future.

Commenting on the recent achievement of his team, Professor Kim said, “We are the first to gain evidence that cucurbituril-ferrocene pairs have a wide array of possibilities, from bio-scientific basic research to the treatment and diagnosis of diseases. We plan to expand our work in this field of applied sciences while continuing our interdisciplinary research with the Life Science Department to develop new therapeutic systems.”