New Material with Characteristics of Multiferroics at Room Temperature Invented (2011.9.8) 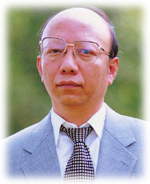 Professor Hyun M. Jang of the Department of Material Science and Engineering and a research team led by Jung-Hoon Lee, advised by Prof. Jang, recently discovered that Samarium ferrite (SmFeO3) is a multiferroics exhibiting connection between the order parameters. The result from Prof. Jang’s experiment was posted on Physical Review Letters, an authoritative paper in the physics area.

Since SmFeO3 consists of orthorhombic structure, it has been known as material without magnetization; however, Prof. Jang and his research team found it actually has electrical polarization without any electrical yard.

The result of the experiment is of interest to the academic world as the researchers hypothesized the characteristics of the material theoretically at first and then proved it. This is the reversal of the way of the normal research.

Prof. Jang assumed that Dzyaloshinskii-Moriya reserved interaction occurs at the normal temperature and SmFeO3 turns into the multiferroics due to its novel tilt spin structure and proved it. Thus, the new multiferroics acting at room temperature was discovered and people are looking ahead to the invention of inerasable memory semiconductor after the power is off.