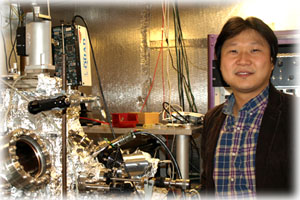 In 2008, POSTECH Alumnus Dr. Donghun Lee made an unexpected discovery during his study of single dopants in Gallium Arsenide (GaAs) semiconductors, which are used for satellites or military products. A dopant is a substance that produces a desired electrical characteristic for semiconductors, and Dr. Lee had been studying a defect semiconductor where one of the lattice points had a dopant atom missing.

He experimented by pushing the atom to the next lattice point, and surprisingly, the atoms automatically rearranged themselves to fill the vacant places as in a puzzle game. Now the defect product turned out to be the key to developing new semiconductors of higher quality. His paper, jointly written with Professor J. A. Gupta of Ohio State University, titled ‘Tunable Field Control Over the Binding Energy of Single Dopants by a Charged Vacancy in GaAs’ was published in the world-renowned science journal Science on December 23, 2010.

As the size of semiconductor devices for cell-phones and personal computers keeps getting smaller, the atoms have become more significant. This explains why Dr. Lee’s discovery is attractive to experts in the field.

The atoms control the flow of electricity in semiconductors depending on the temperature and voltage, and the binding energy between the atoms is a major variable that influences the performance of computer devices. Binding energy refers to the energy that is needed to separate the bond of particle constituents.

Accordingly, a loss of one or more atoms during the fabrication of semiconductors results in a defect product and deteriorated performance. While rearranging the atoms to fill the vacant place, the research team found that the vacant place carries an electric charge and that it influences the binding energy between atoms.

In actual applications, it will be possible to make identical atoms bear different characteristics by manipulating the atoms. Not only will this discovery improve the current technology for semiconductors, but it can also be utilized in the development of new devices with an unprecedented paradigm. As the size of semiconductor devices decreases, it is becoming increasingly significant to develop the technology that controls the characteristics of each and every one of the atoms.

Moreover, Dr. Lee’s work may be able to provide clues to the research on unifying the CPU and RAM of a computer. Once successful, rebooting will be unnecessary for the computer, plus there will be less electrical energy loss.

Dr. Lee stated, “It is natural to think that defect substances should be eliminated as much as possible, but a slight change in viewpoint allowed me to make a very useful discovery. If the semiconductor industry applies my work, computers will process data faster than now and also may materialize the novel paradigm of quantum computers.”