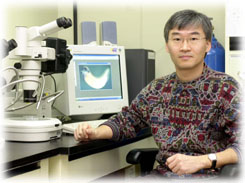 TGFβ ligands belonging to the Activin/Nodal family, induces mesoderm and endoderm, specifies the embryonic axes, promotes gastrulation movements, maintains pluripotency of embryonic stem cells, and determines left-right asymmetry in vertebrates. Activin/Nodal ligands signal through type I and type II transmembrane serine/threonine kinase receptors. Ligand binding induces the formation of heteromeric receptor complexes in which type II receptors phosphorylate and activate type I receptors. The activated type I receptors transduce the signal inside the cell through the phosphorylation of the receptor-regulated Smads (R-Smads), Smads 2, and/or Smad3. Once activated, RSmads form complexes with common mediator-Smad (co-Smad), Smad4, and translocate into the nucleus, where they regulate gene expression with DNA-binding partners and transcriptional cofactors both positively and negatively.

The strength of Activin/Nodal signaling is represented by the levels of active nuclear Smad2, which are regulated at several steps in signaling cascade. Differential occupancy of receptor leads to varying levels of activated Smad2, and induces different sets of target genes. A recent study demonstrated that the length of time, for which the Activin-Activin receptor signaling complex dwells in the endocytic pathway, determines the duration of the serine/threonine kinase activity of receptor, thereby controlling the intracellular concentration of active Smad2. In fact, endocytosis occurred through the clathrin-dependent endocytic route is required for promotion of Smad-dependent signaling activation. Alternatively, internalization via the lipid-raft/caveolar compartments leads to the accelerated receptor degradation which is mediated by Smad7/Smurf2 complex. Thus, proper partitioning of receptors into two distinct compartments may be essential for the fine control of receptor availability and signaling activity. However, the molecular mechanism underlying this segregation remains unknown.

In this study, we showed that Rap2, a member of Ras GTPase family, regulates the trafficking of Activin/Nodal receptors to modulate signaling activity. Rap2 was required for sorting of internalized Activin/Nodal receptors into recycling pathway in the absence of ligand activation and thus maintaining their proper levels at the cell surface. Ligand-activated receptors were not recycled to the plasma membrane, but their turnover was delayed by Rap2. Interestingly, Rap2 counteracted Smad7 function in these processes. We also found that there is difference in the efficiency of Activin/Nodal receptor recycling between dorsal and ventral halves of early embryo, which is regulated by the temporally dynamic expression of Rap2. This led to the differential onset of Smad2 phosphorylation across the dorsoventral axis of Xenopus early embryo. Therefore, our data identify Rap2 as a key player in the regulation of receptor trafficking that might affect cell responsiveness to extracellular ligands and signaling duration.