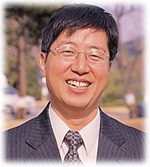 Ultrahigh density arrays of conducting polymer nanorods have been fabricated through a joint research project by Professors Jin Kon Kim and Su-Moon Park of Pohang University of Science and Technology (POSTECH), Dr. Jae-Woong Yu of Korea Institute of Science and Technology (KIST), and Professor Thomas P. Russell of the University of Massachusetts at Amherst, U.S.A., as reported in Nano Letters, vol. 8, 2315-2320 (2008).

Nanoporous templates, for instance, track-etched polymer membrane and anodized aluminum oxide (AAO) membrane, have been widely used to prepare conducting polymer nanotubes, nanowires or nanorods. But, the former contains randomly distributed nanochannels with an areal density of only ~109 pores/cm2 which precludes the fabrication of ultrahigh density arrays of conducting polymer nanorods. With the AAO membranes, well-defined arrays of conducting polymer nanotubes and nanowires have been synthesized by electrochemical polymerization. However, upon removal of the AAO matrix, the array of nanostructure collapses onto the substrate, losing its orientation.

To overcome these disadvantages, we employed nanoporous block copolymer template with a diameter of ~25nm and a density of ~1011 pores/cm2, which was prepared by the mixture films of polystyrene-blockpolymethylmethacrylate (PS-PMMA) and PMMA homopolymer. Then, ultrahigh density arrays of conducting polypyrrole (PPy) nanorods are fabricated directly on the indium-tin oxide (ITO) coated glass by an electropolymerization within the nanoporous template, as schematically depicted in Figure 1. As shown in field-effect scanning electron microscopy (FESEM) images given in Figures 2a and 2b, nanorods did not collapse, and the retained self-supporting arrays of conducting polymers oriented normal to the substrate surface, even after the template was removed.

Since PPy chains are well-confined in the nanosized holes, they are highly aligned to the template length direction, which results in much higher conductivity compared with continuous PPy film. This high degree of chain orientation was confirmed by high resolution transmission electron microscopy (HR-TEM) image, given in Figures 2c and 2d, even though the separation distance for two neighboring PPy main chains is as small as 0.37nm. We also determined the high orientation of PPy chain by using grazing incidence Xray diffraction (GIXD) experiment with a synchrotron source in beamline 5A of Pohang Light Source.